Why Donate to the First Flight Society?

Home/Events/Why Donate to the First Flight Society?
Previous Next

Why Donate to the First Flight Society?

You see this almost every day from one organization or another. You get telephone calls. You get letters. You see it on television. You hear it on the radio.

Though primarily known as the group that puts on the annual celebration at the Wright Brothers National Memorial every December 17th, that is not all that we do. Our primary mission is to memorialize Orville and Wilbur Wright, first in the world to successfully achieve powered flight in a heavier than air machine, on December 17, 1903 at Kitty Hawk, North Carolina. First Flight Society invites and promotes visits to the Wright Brothers National Memorial, so all may see the birthplace of powered flight. First Flight Society contributes to the advancement of aviation through programs, activities, education and the arts.

Sounds impressive, but what does this mean to you? The primary duty of the FFS is to promote aviation education, concentrating on the work of the Wrights. Since 1966 the Society has been responsible for the Paul E Garber Shrine. The Shrine honors those individuals and groups that have achieved significant “firsts” in aviation’s development. Inductees include Charles Lindbergh, John Glenn and most recently Katherine Johnson (Hidden Figures). 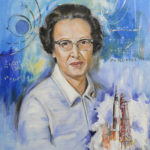