This author has not yet filled in any details.
So far First Flight Admin has created 77 blog entries.

‘The desire to fly is an idea handed down to us by our ancestors who … looked enviously on the birds soaring freely through space … on the infinite highway of the air.”
—Wilbur Wright

Today is Wilbur Wright’s 150th birthday. Wilbur was born on April 16, 1867 near Millville, Indiana. Wilbur was an inventor and his nickname was “Father of Modern Aviation”. Wilbur’s brother Orville was his playmate, co-inventor and business partner throughout his life. Wilbur and Orville lived in Dayton, Ohio most of their lives, but their most famous feat took place at Kill Devil Hill in Kitty Hawk, North Carolina. The Wright Brothers had their first successful airplane flight on December 17, 1903. Their Wright Flyer was the first powered, heavier-than-air machine to achieve controlled, sustained manned flight. 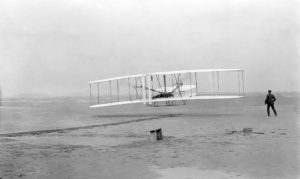 HAPPY BIRTHDAY, WILBUR! Fourth Graders at First Flight Elementary will be surprised to see Orville and Wilbur Wright drop by the classrooms on Tuesday, April 18 to recognize Wilbur Wright’s 150th birthday (April 16)! Representatives of the National Park Service from the Wright Brothers Memorial Park will accompany the Orville & Wilbur to explain the NPS Kids in Parks program. Open to all fourth graders, nationwide Get program information at: https://www.nps.gov/kids/index.cfm

To reach the First Flight Society page use this link:

Please join The First Flight Society the weekend of April 15-16, 2017 at the Wright Brothers National Memorial to celebrate Wilbur Wright’s birthday. Wilbur was born April 16th, 1867 near Millville, Indiana, to Milton and Susan Wright. Pencil this weekend on your calendar and we will provide more details as we get closer to the event.

The First Flight Society will host the 113th Celebration of Powered Flight at Wright Brothers National Memorial on December 17, 2016.  The theme this year will recognize and honor the 100th Anniversary of  the United States Coast Guard Aviation.  Two great pioneers in aviation history and proud Coast Guardsmen, Captain Frank Erickson and Commander Stewart Graham, will be inducted into the Paul E. Garber First Flight Shrine.  ADM Paul F. Zukunft, Commandant, United States Coast Guard, will be the keynote speaker for the Commemorative Ceremonies.  We will have bands, flags, our Coast Guard heroes and much more– Mark your calendars!  Don’t miss this opportunity to pay tribute to a branch of our military that have been an integral part of our local history!

Be sure to join us for a very exciting day on August 19, 2016 at the Wright Brothers National Park – We will be celebrating National Aviation Day, Orville Wright’s 145th Birthday, and the Centennial year of the National Park Service.  Admission to the park will be free.  Activities include static display of military and civilian aircraft, educational exhibits by NASA, NOAA, NC DOT Aviation, Outer Banks Visitors Center, youth interactive activities, special presentations in the Visitors Center Flight Room about the Wright Brothers, the United States Coast Guard, and the National Park Service’s 100 years of service to our nation and their aviation story.  Also, you will enjoy a FLYOVER of military and civilian aircraft. And, special surprise guests will be on hand to visit with you!  Don’t miss it.  Hours 9:00 am-5:00 pm.

It is with a sad heart that we report to you that our most beloved Aviatrix Mary Feik, 92, passed away late last night.   Mary was at her home in Annapolis, Maryland with her daughter Robin Vest at her side as she passed.  Mary Feik was diagnosed with cancer earlier this year.

Mary Feik was known throughout the United States and around the world for her many extraordinary and extensive achievements and contributions to the field of aeronautics as an engineer, pilot, mechanic, educator and leader.  She held many distinguished positions, awards and honors including the rank of Colonel in the United States Air Force Auxiliary, Civil Air Patrol.  Mary Feik was the 2014 inductee into the First Flight Society’s Paul Garber Shrine at Wright Brothers National Memorial in Kitty Hawk, NC.

First woman to complete a solo flight around the world

Jerrie Mock, the first woman to complete a solo flight around the world, will be the 2015 inductee in the Paul E. Garber First Flight Shrine. The induction is part of ceremonies to be held on December 17th at Wright Brothers National Memorial. In 1964, at age 38, and the mother of three, Ms. Mock flew a single engine Cessna 180 christened the “Spirit of Columbus”, nicknamed “Charlie”, a total of 23,000 miles in 29 days, to become another “first” in the world of aviation.

Geraldine “Jerrie” Fredritz Mock was born on November 22, 1925 in Newark, Ohio. Her interest in flying started at the early age of seven when she had her first airplane ride, and declared she was going to be a pilot.  She was eleven when Amelia Earhart launched her around the world flight, and every day […]

Mary is the first woman aviation engineer.  But Mary did not stop there.  During WWII, Mary became an expert on many military aircraft and is credited with becoming the first woman engineer in research and development in the Air Technical Service Command’s Engineering Division at Wright Field in Dayton, Ohio.  She flew more than 6,000 hours as pilot in fighter, attack, bomber, cargo and training aircraft.  She qualified as a B-29 Flight Engineer and was an engineering analyst in test aircraft for flight and maintenance requirements.

She participated in engineering “mock-up” evaluations for new aircraft prop set for production at the various aircraft manufacturing plants to determine flight and maintenance training requirements.  Mary has authored pilot training and maintenance manuals for many of the military aircraft.

Be the First to be a Major Sponsor to First Flight Society!

Thank you for your support to the First Flight Society.